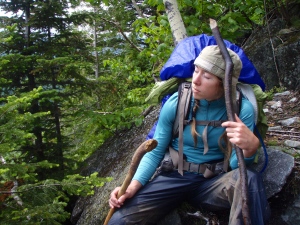 Caught up in a moment of exhaustion after climbing up and slipping down many mountains along the Appalachian Trail. Later this day we would receive the wonderful “Trail Magic” from the lovely family described below.

The day had been absolutely exhausting and I was spent.  I had spent several hours at the DMV in Greensboro trying to get my Pennsylvania license transferred over to North Carolina where I had recently declared residency and bought a new car.  The day had turned grey, rain was pouring down and I had spent the past 25 minutes trying to find my way back to the highway from some random corner of the city I had never ventured into before.  All I wanted to do was get home.

I finally merged onto a road that looked half familiar and felt reassured I would be back in my comfy apartment within 45 minutes.  As I was cruising toward the edge of the city, I saw a woman walking on the side of the street, a look of desperation strewn across her face. She was very skinny, probably in her early forties although she looked worn in a manner that aged her and rain dripped off her dark skin.  I slowed down, rolled down my window and asked her if she was okay. With a look of shock and surprise at my stopping, she told me how she had just missed the last bus, and she had to get to this address before they closed at 6 o’clock or else she would not be able to begin her new life in Florida.  I told her to get in, that I would drive her and we would make it by 6.  It was 5:47.  I stepped on the gas and away we went.

As we zipped our way back into the city she repeatedly said, god bless you child, and then proceeded to tell me a little bit of her story, how her church community had collected enough money to buy her a ticket to Florida where she had a friend who had arranged a new job for her.  She was supposed to start this new job on Monday.  She told me of how she had lost everything, her family and her job in Greensboro, how this was her last chance to start her new life.  She described how horrible and hopeless she felt chasing after that bus on a rainy friday evening, knowing if she did not pick up the plane ticket before 6 o’clock she would not be able to fly the next day. It was now 5:54.

In my entire life I had never picked up a hitchhiker, nor had I ever invited a random stranger into my car.  There was just some indescribable feeling that I had, my gut telling me I was meant to play a role in this woman’s life.  We wound our way around the city, getting a bit turned around here or there as this was before iPhones and Google Maps and we were just using my atlas to navigate.  Eventually we pulled up to a very small little building, the address matching the scribble note she was holding- to our relief the light was still on.  I quickly hugged her and wished her good luck on her journey and her new life, and told her I was so happy that I could was able to help her today.  She thanked me again, over and over, before jumping out of the car and dashing to the building.  I sat for a moment, making sure the building was still open and she would be okay.  When she waved to me after entering, I backed out of the drive and again found myself lost in the city, in the grey rain. It was 6:01.

I no longer felt exhausted, I wasn’t dreaming of my warm bed or wishing myself home, I didn’t care how late it was or that I was lost again. I was laughing out loud. I was smiling so big that my cheeks began to ache.  Yes!! We had made it!! I had no idea what would happen to this woman, I had no way of knowing what would become of her or her new life, but I had played some magical part of her journey and wow did it feel incredible.  I acknowledged how fantastic it was to give with no expectation for oneself, to be able to trust and act as a vessel of fate for another human being.

Years later, when I was thru-hiking the Appalachian Trail I had this similar experience many times, but the roles were reversed.  As a thru-hiker you experience countless moments of tired exhaustion, days when you have walked for 25 miles, crossed rivers and summited three mountains, you are out of food and out of water and walking along the highway, trying to get a hitch into town so that you can have a warm meal and wash the six days of dirt and grime off of your sweaty body and your rotten smelling clothes.  Cars roll by without slowing, and on you walk, your aching feet begging for a rest.

One day, after a very rough week that had us hiking through mud and rain for six days straight, we were having “one of those days” and could not get a hitch.  After two miles hiking along the road, a minivan pulled over and a clean and cheerful family rolled down the window and beckoned for us to climb in.  The father up front had a strong Irish accent, the two children in the back seat stared at us with enormous eyes of wonder. Names were exchanged, and the questions began around what our story was.  When we told them had walked 845 miles to get to that very place, they stared at us in awe. We provided the name and address of the hostel where we intend to stay, but the father said first we must come for dinner.  They proceeded to take us home, offered us showers and washed our clothes, cooked and served us the most incredible salmon and steak dinner you could imagine, all the while asking countless questions about what our lives on the trail were like, why we were hiking and what kind of characters we had met along the way.

As we described countless adventures, the parents told their children to listen to us closely, to ask us questions and to imagine what a great journey we were on.  After treating us as honored guests in their home, they drove us onward to the hostel where we were able to finally sleep in a bed with full bellies and clean clothes.  As they dropped us at the hostel, the family thanked us for the time we shared with them. They thanked us…the vastness of their kindness was overwhelming for us, and there were no words that could express how much we appreciated their selfless generosity. Yet here they were, thanking us for being a brief part of their lives, just as I thanked that woman in North Carolina, for being in that place at that moment so that I could play some role in her journey.  Gratitude. Oh what gratitude comes when we encounter these vessels of fate, who deliver us where we are meant to be, in moments when they are most needed, the drivers of whom we also inevitably inspire, even if done unintentionally.

Our lives are intertwined with the lives of others; and even as we weave our own lives individually, we are constantly crossing the paths of one another, making connections and perhaps building bridges where they are needed, even if we are not the ones meant to cross them.  There is so much beauty in acknowledging this, and appreciating the moments when that little magic vessel shows up. Whether you are the driver or the passenger, you are ultimately equally blessed.

In what moments of your life have you experienced the vessel of fate arriving in the nick of time?  Have you had the beautiful gift of being able to be at the helm of the vessel, delivering some selfless act of kindness in the absolute perfect moment it was required?  How fantastic did you feel!?

2 thoughts on “Acting as a Vessel for Fate”

It is wonderful to be here now.
Being led around a field by a tiny human is such a joyful invitation to move slowly through this precious world, pausing frequently to build relationship with everyone who opens themselves enough to call you toward them- be they puppy dog, meadow grass, horse or stone💚
Oh how these winter skies make me swoon.
I live my life in widening circles.
A day in the life of Sofía Alegría 😍✨🦄🧚‍♀️
Adventures with volcanoes and snow and baby and sunshine! 🤩🙏💓
This magnificent human turns 40 today, my brother.
Nine years ago we gathered for such a celebration of love 😍💞
This magical place that called us home to it...
Sofía sandwich 🥰🐴
Welcome winter 💙
Whenever my dad shares a story about when I was little, he always mentions what the tone of my voice was like, or remembers something I said that he found remarkable.